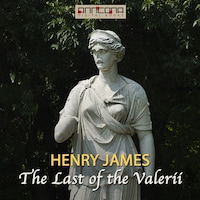 The Last of the Valerii

The Last of the Valerii is a short story by Henry James first published in 1884.

An unnamed American painter resident in Rome serves as narrator in this story, watching as his god-daughter Martha, becomes the wife of Prince Marco Valerio.

The young bride is eager to use some of her American fortune in the service of archeology at the Villa Valerio, her husband's somewhat run down Roman house.

Archeology can be, her god-father suggests, a rather expensive hobby, but to his (and her) surprise, the dig brings to light a lovely marble statue of Juno. Martha is overjoyed, but it is soon clear that her husband is overcome by the discovery, and overcome in ways that are to be disquieting.

In this, as in several of James's stories, there are elements of the supernatural -- or so the reader might invited to believe. To what, in any case, will the discovery lead?