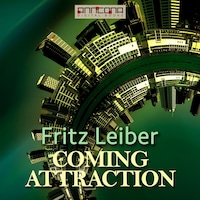 Coming Attraction is a science fiction short story by Fritz Leiber originally published in the second issue (November 1950) of Galaxy Science Fiction. The story was nominated for a Retro Hugo Award in 2001.

The story is set in Manhattan during a protracted war between the United States and the Soviet Union; midtown Manhattan has been rendered an uninhabitable wasteland by a Soviet "Hell Bomb," though the rest of the city is still occupied. The narrator is a British citizen named Wysten Turner, who is in New York to barter, in exchange for grain, electronic equipment that he suspects will be used in the construction of an American military base on the moon.

Coming Attraction was among the stories selected in 1970 by the Science Fiction Writers of America as one of the best science fiction short stories published before the creation of the Nebula Awards. As such, it was published in The Science Fiction Hall of Fame Volume One, 1929-1964. It has been anthologized and collected at least 25 times.