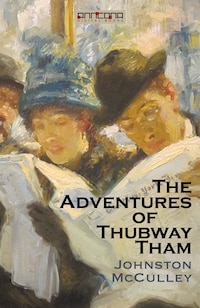 The Adventures of Thubway Tham

The Adventures of Thubway Tham is a collection of 4 adventures featuring Thubway Tham written by Johnston McCulley (author of Zorro).

Thubway Tham is a pulp fiction character created by Johnston McCulley, (actually, the character is “Subway Sam,” but has a lisp and it comes out that way). He’s a pickpocket who only works the New York Subways, and who only robs those who deserve it.

Thubway Tham, as described by McCulley, is "a clever pickpocket, one of the cleverest in the business, and he works only in the subway during rush hours." His friends had called him "Subway Sam," but, due to his lisp, his nickname soon became "Thubway Tham."

A typical Thubway Tham story features the pickpocket committing some sort of crime. He is pursued by Detective Craddock, but, due to the cop's own incompetence, Thubway Tham always gets away. The people who Tham robs are usually deserving of the theft. He also often antagonizes bigger criminals to teach them a lesson.

The stories included are:

Johnston McCulley (1883-1958) was the author of hundreds of stories, fifty novels, numerous screenplays for film and television, and the creator of the character Zorro.

Many of his novels and stories were written under pseudonyms. Aside from Zorro, McCulley created many other pulp characters, including Black Star, The Mongoose, and Thubway Tham. Many of McCulley's characters; the Green Ghost, the Thunderbolt, and the Crimson Clown, were inspirations for the masked heroes that have appeared in popular culture from McCulley's time to the present day.