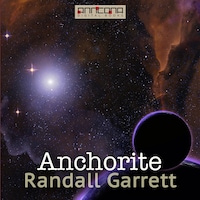 Anchorite is a science fiction novella by Randal Garrett first published in 1959.

There are two basic kinds of fools--the ones who know they are fools, and the kind that, because they do not know that, are utterly deadly menaces!

Randall Garrett sticks a sharp needle into our government and society in this wonderful story. He projects the current trends towards paternalistic government into the future.

Yes, we have attained a world government and everyone is equal whether they want to be or not; everyone is taken care of no matter how incompetent, stupid or sleazy they are and everyone is out to undermine everyone else. The author predicts (sadly only too well) what the trends of today will eventually produce if allowed to continue.

But wait! There is hope in the asteroid belt where hard physical laws weed out jerks and incompetents and only those who possess common sense and the ability to actually survive are allowed to govern.

But will the Earth government allow this to continue? Of course not. Listen to this great story to have a peek into the future.