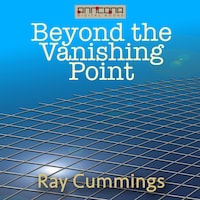 Beyond the Vanishing Point

Beyond the Vanishing Point is a science fiction novel by American author Ray Cummings first serialised in Astounding Stories in March 1931.

THEY OPENED THE PANDORA'S BOX OF ATOMIC TRAVEL.

When George Randolph first caught sight of Orena, he was astounded by its gleaming perfection. Here were hills and valleys, lakes and streams, glowing with the light of the most precious of metals.

And, more astonishing than that, it was a world of miniature perfection-an infinitely tiny universe within a golden atom!

But for Randolph it was also a world aglow with danger. Somewhere in its tiny vastness were the friends he had to rescue. Captives of a madman, they had been reduced to native Orena size; to return to Earth they needed the growth capsules Randolph was bringing them.

It was up to Randolph to find them-and quickly-for the longer they stayed tiny, the closer they came to passing BEYOND THE VANISHING POINT!

Having worked for Thomas Alva Edison, Ray Cummings was inspired by science’s possibilities and began to write science fiction.

His most highly regarded work was the novel The Girl in the Golden Atom published in 1922. His career resulted in some 750 novels and short stories, using also the pen names Ray King, Gabrielle Cummings, and Gabriel Wilson.