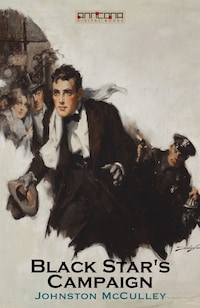 Black Star's Campaign by Johnston McCulley is a detective novel first published in 1919.

After engineering a daring escape from jail, Black Star emabarks upon a nefarious series of daring robberies to exact revenge on the the city and Sheriff Kowen. Roger Verbeck is once again called upon to assist the police in stopping Black Star and his secretive band of followers.

Black Star is probably McCulley's second most popular character (after Zorro), "The Black Star" is a criminal mastermind, the kind was once termed a "gentleman criminal." He does not commit murder, nor does he permit any of his gang to kill -- not even the police or his arch enemy, Roger Verbeck. The Black Star does not threaten women, always keeps his word, and is invariably courteous. Nor does he deal with narcotics in any of his stories. He is always seen in a black cloak and a black hood on which is embossed a jet black star.

Black Star and his gang use "vapor bombs" and "vapor guns" to render their victims instantly unconscious, a technique which pre-dated the Green Hornet's gas gun by several decades.

Johnston McCulley (1883-1958) was the author of hundreds of stories, fifty novels, numerous screenplays for film and television, and the creator of the character Zorro.

Many of his novels and stories were written under pseudonyms. Aside from Zorro, McCulley created many other pulp characters, including Black Star, The Mongoose, and Thubway Tham. Many of McCulley's characters; the Green Ghost, the Thunderbolt, and the Crimson Clown, were inspirations for the masked heroes that have appeared in popular culture from McCulley's time to the present day.