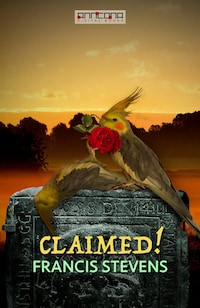 Claimed! is a science fiction horror novel by Francis Stevens (pseudonym for Gertrude B. Bennett), "The woman who invented dark fantasy".

Claimed! is the story of a small green casket made of indestructible stone and incised in scarlet with an indecipherable inscription.

The casket makes its way from an island thrust up in an earthquake from the seafloor, into the hands of a sailor, from there to a dealer in curios, and finally into the very powerful clutches of a New Jersey millionaire named Jesse J. Robinson.

Strange and horrific events fall upon those in possession of the casket.

Claimed! is yet another masterpiece of dark fantasy, from the woman who practically jump-started the genre single-handed.

”And now all the air and the earth and the sea were shaken by a sound, low but terrible. It seemed to emanate from no special source, but to fill all space simultaneously.

The lowering sky had assumed a sulfurish yellow cast. A faint wreath of vapor that overhung one of the snowcapped mountains grew suddenly dense, black, shot with forks of ruddy fire.

It rolled down the mountainside, an avalanche of black cloud, and from the peak above an enormous flame burst skyward.”

Claimed! first appeared as a three-part serial in Argosy from March 6 to March 20, 1920.

Gertrude Barrows Bennett (1883–1948) was the first major female writer of fantasy and science fiction in the United States, publishing her stories under the pseudonym Francis Stevens. Bennett wrote a number of highly acclaimed fantasies between 1917 and 1923 and has been called "the woman who invented dark fantasy".

Her most famous books include Claimed! (which Augustus T. Swift, in a letter to The Argosy called "One of the strangest and most compelling science fantasy novels you will ever read") and the lost world novel The Citadel of Fear.

Bennett has been credited as having "the best claim at creating the new genre of dark fantasy". It has been said that Bennett's writings influenced both H. P. Lovecraft and A. Merritt, both of whom "emulated Bennett's earlier style and themes".