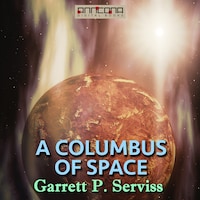 A Columbus of Space

A Columbus of Space is a science fiction novel by Garrett P. Serviss first published in 1909.

A classic science fiction adventure in the style of and dedicated to the readers of Jules Verne.

The hero of this tale of scientific wonder is called "A Columbus of Space" because he is the first to take advantage fo the power of "inter-atomic energy," which enables him to navigate the Ocean of Ether and sail to the shores of another world than ours.

He constructs a curious spool-shaped machine and "sets sail" into space, arriving with his companions on the planet Venus.

On Venus they discover the dwellers of the dark side, incredible floating cities, and peril at every turn.

This is first story ever written about an atomic powered spacecraft. Intrepid explorers from Earth journey to the planet Venus, which always has one side facing the Sun.

The night side is a frozen polar wasteland inhabited by Neanderthal like hominids, while the light side has an advanced, Greco-Roman classical type civilisation.

Garrett Putnam Serviss (1851-1929) was an American astronomer, popularizer of astronomy, and early science fiction writer. Serviss showed a talent for explaining scientific details in a way that made them clear to the ordinary reader.

Serviss' favorite topic was astronomy, and of the fifteen books he wrote, eight are devoted to it. He unquestionably was more widely read by the public on that topic than anyone prior to his time. He also wrote six works of fiction in his lifetime, all of which would today be classified as science fiction.