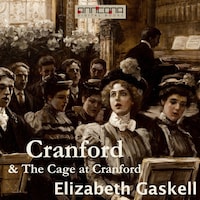 Cranford & The Cage at Cranford

Cranford is one of the better-known novels of the 19th-century English writer Elizabeth Gaskell. It was first published in 1851 as a serial in the magazine Household Words, which was edited by Charles Dickens.

A collection of comic sketches, these stories look to sympathetically portray changing small-town customs and values. Cranford is set in a small market town populated largely by a number of respectable ladies. It tells of their secrets and foibles, their gossip and their romances as they face the challenges of dealing with new inhabitants to their society and innovations to their settled existence. Cranford is a genteel and humorous look at Victorian society by Elizabeth Gaskell, and is quite a change from her more gritty novels like Mary Barton or North and South.

The book is a series of episodes in the lives of Mary Smith and her friends, Miss Matty and Miss Deborah, two spinster sisters. The fictional town of Cranford is closely modelled on Knutsford in Cheshire, which Mrs Gaskell knew well.

Appended to this recording is a short sequel, The Cage at Cranford, written ten years later and published in the journal All the Year Round. In a letter to Mrs. Gaskell, Charlotte Bronte wrote: “Thank you for your letter, it was as pleasant as a quiet chat, as welcome as spring showers, as reviving as a friend’s visit; in short, it was very like a page of Cranford.”...

The novel has been thrice adapted for television by the BBC. The first version was broadcast in 1951, the second in 1972, with Gabrielle Hamilton as Miss Matty, and the third version in 2007.

Elizabeth Cleghorn Gaskell, (1810-1865), was an English novelist and short story writer during the Victorian era. Her novels offer a detailed portrait of the lives of many strata of society, including the very poor, and are of interest to social historians as well as lovers of literature. Mrs. Gaskell, as she was often referred to, is considered one of the greatest British novelists of the Victorian era.