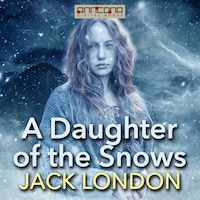 A Daughter of the Snows

A Daughter of the Snows is Jack London's first novel, published in 1902.

Set in the Yukon, it tells the story of Frona Welse, a strong and interesting heroine, "a Stanford graduate and physical Valkyrie" who heads to the Yukon gold fields after creating a stir in her hometown by being strong and forthright and by befriending the town's prostitute.

In the course of her adventures, she finds herself at the distaff point of a love triangle, being torn between love for two suitors: Gregory St Vincent, a local man who turns out to be cowardly and treacherous; and Vance Corliss, a Yale-trained mining engineer.

The novel is noteworthy for its strong and self-reliant heroine, one of many who would people his fiction.

Jack London (1876-1916) was an American author, journalist, and social activist. He was a pioneer in the then-burgeoning world of commercial magazine fiction and was one of the first fiction writers to obtain worldwide celebrity and a large fortune from his fiction alone. London's most famous novels are The Call of the Wild, White Fang, The Sea-Wolf, The Iron Heel, and Martin Eden.