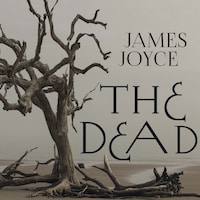 ”The Dead” is the final short story in the 1914 collection Dubliners by James Joyce. The other stories in the collection are shorter, whereas at 15,952 words, ”The Dead” is almost long enough to be described as a novella.
The story deals with themes of love and loss as well as raising questions about the nature of the Irish identity.
The story centres on Gabriel Conroy, a professor and part-time book reviewer, and explores the relationships he has with his family and friends. Gabriel and his wife, Gretta, arrive late to an annual Christmas party hosted by his aunts, Kate and Julia Morkan, who eagerly receive him. After a somewhat awkward encounter with Lily, the caretaker's daughter, Gabriel goes upstairs and joins the rest of the party attendees. Gabriel worries about the speech he has to give, especially because it contains academic references that he fears his audience will not understand. When Freddy Malins arrives drunk, as the hosts of the party had feared, Aunt Kate asks Gabriel to make sure he is all right.
Among the most significant works James Joyce: A Portrait of the Artist as a Young Man, Ulysses, Finnegans Wake, Dubliners, The Sisters, Eveline, After the Race, An Encounter, Araby, The Boarding House, Counterparts, Clay, A Painful Case, Ivy Day in the Committee Room, A Mother, Two Gallants, A Little Cloud, Grace.