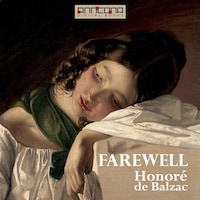 Farewell (“Adieu”) is a novella by Honoré de Balzac, first published in 1832 and part of the La Comédie Humaine.

In his startling and tragic novella, Balzac adds to the 19th century’s literature of the hysterical woman: sequestered, confined in her madness; mute, or eerily chanting in her moated grange.

The first Mrs Rochester lurks in the wings; the Lady of Shalott waits for the shadowy reflection of the world outside to shatter her illusion. Freud’s earliest patients will soon enter the waiting-room in their turn.

Whilst out hunting two friends come across a strange waif-like woman shut up in a decaying chateau which one of them dubs “the Palace of the Sleeping Beauty”. Soon we are dragged back to the terrible masculine reality of the 1812 retreat of Napoleon’s army from Moscow and the grotesque massacre that was to traumatize the heroine, parting her from her lover.

Their reunion is more desperate still, as the earlier event is recreated in a bizarre and vain attempt to root out madness and compel the return of happiness…