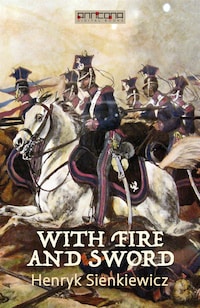 With Fire and Sword

With Fire and Sword is a historical novel by the Polish author Henryk Sienkiewicz, published in 1884. It is the first volume of a series known to Poles as The Trilogy, followed by The Deluge (1886) and Fire in the Steppe (also published under the title Sir Michael, or Colonel Wolodyjowski).

Sienkiewicz combines the adventure novel with the historical love story, setting the action in the huge territory from Silesia to easternmost Ukraine, mostly in military camps, but also at the royal court, in the manors of the nobility, and in local parliaments.

With Fire and Sword is a historical fiction novel, set in the 17th century in the Polish–Lithuanian Commonwealth and chronicles the 17th century Cossack revolt known as the Chmielnicki Uprising.

It was initially serialized in several Polish newspapers, chapters appearing in weekly installments. It gained enormous popularity in Poland, and by the turn of the 20th century had become one of the most popular Polish books ever. It became obligatory reading in Polish schools, and has been translated into English and most European languages.

The trilogy was a vehicle for expressing Polish patriotism in a Poland partitioned and deprived of independence. It avoided censorship by using a historical setting concerning wars with past enemies other than the countries ruling parts of Poland at the time of writing (Russia, Germany and Austria).

The novel has been adapted as a film several times, most recently in 1999. The most recent film version of the novel, With Fire and Sword, was directed by Jerzy Hoffman and released in 1999. At the time, it was the most expensive Polish film ever made (since surpassed by Quo Vadis, 2001). Although the novel is the first part of the Trilogy, the film was the last part of Hoffman's version of the trilogy to be made, following The Deluge, which was filmed in 1974, and Colonel Wolodyjowski, which was filmed in 1969.

Henryk Sienkiewicz (1846-1916) was a Polish journalist and Nobel Prize-winning novelist. A Polish noble, he was one of the most popular Polish writers at the turn of the 19th and 20th centuries, and received the Nobel Prize in Literature in 1905 for his ”outstanding merits as an epic writer.”

Many of his novels remain in print. In Poland he is best known for his ”Trilogy” of historical novels – With Fire and Sword, The Deluge, and Fire in the Steppe – set in the 17th-century Polish-Lithuanian Commonwealth; internationally he is best known for Quo Vadis, set in Nero's Rome.