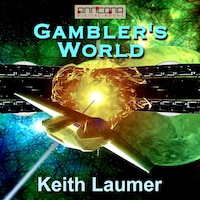 Here is a story starring the always unconventional Terrestrial Diplomat, Retief. As a diplomat, Retief does not always follow procedure.

Well the truth is that he almost never follows procedure but somehow his wit and strength manage to salvage most situations from the bumbling of the other diplomats.

His sardonic approach to inter-galactic negotiations in this story is a delight to read.

Gambler’s World was first published in Worlds of If November 1961.