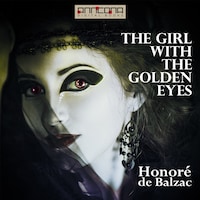 The Girl with the Golden Eyes

The Girl with the Golden Eyes is a novel by Honoré de Balzac first published in 1834.

In this novel, Balzac the virtuoso satirist depicts the levels of Parisian society as a version of the Inferno of Dante.

Our beautiful, androgynous hero, Henri de Marsay, is one of the bastard offspring of a depraved Regency milord and himself practises the cynical arts of the libertine. His quarry is the exotic Paquita Valdes, she of the golden eyes.

But there is a mysterious third person in this liaison...

The shocking truth of their interrelationships marks this out at once as one of those French novels that Lady Bracknell would instantly ban from the house.

The Girl with the Golden Eyes is the third part of a trilogy. Part one is entitled Ferragus and part two is The Duchesse de Langeais. The three stories are frequently combined under the title The Thirteen.