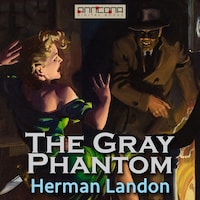 The Gray Phantom is a detective novel by American author Herman Landon.

A woman is apparently murdered in a New York auditorium under very suspicious circumstances one evening during a performance.

Helen Hardwick happened to be in attendance that evening, as she had written the play that was being performed, and she was the only person to have caught a glimpse of something peculiar just before the murder.

She also heard an ominous laughter which would haunt her for a long time. Was the Gray Phantom involved, or could he assist with the investigation that Helen was to become involved with?

The Gray Phantom was created by Herman Landon, the creator of Picaroon & Godfrey Usher; The Phantom appeared in Detective Story Magazine starting with Seven Signs.

The Phantom is Cuthbert Vanady, and he is a handsome devil, tall, lanky, with a 'lean, clean-chiseled' face and ash-grey eyes to match the gray at his temples and his gray business suits. The Phantom is more than just good-looking, of course. He's a criminal mastermind.

Herman Landon (1882-1960) was an American author of pulp detective fiction, best remembered for his popular 1920s detective series "Gray Phantom". He also worked as a feature writer and managing editor for the Washington Herald.