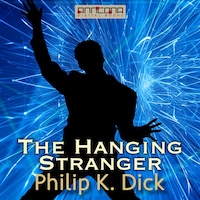 The Hanging Stranger is a science fiction short story by Philip K. Dick, first published in 1953.

After a hard day's work at his basement, Ed Loyce starts his Packard and drives in the direction of his TV Sales Store. In the City Square he is startled to find a haggard bundle hanging from the solitary lamp-post beside the drinking fountain. A closer examination reveals the horrifying fact that the ragged bundle is indeed that of a dead man in a state of advanced death and decay.

But when he calls attention to the morbid display, the strange reactions of his friends and neighbours bring him to a disturbing realization.