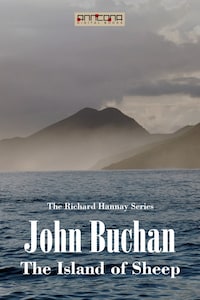 The Island of Sheep

The Island of Sheep (1936) is a novel by John Buchan. It is part of the series featuring Richard Hannay and Sandy Arbuthnot.

The action occurs twelve years later on from the last novel, when Hannay, now in his fifties, is called by an old oath to protect the son of a man he once knew, who is also heir to the secret of a great treasure. He obtains help from Sandy Arbuthnot, now Lord Clanroyden, and Lombard. The action takes place in England, Scotland and on the Island of Sheep. This is located in what Buchan describes as 'the Norlands': clearly the Faroe Islands. There are several stereotypical villains, in particular D'Ingraville from The Courts of the Morning, and the book also focuses on Hannay's son, Peter John, now a bright but solemn teenager.

Major-General Sir Richard Hannay, KCB, OBE, DSO, Legion of Honour, is a fictional secret agent and army officer created by Scottish novelist John Buchan. In his autobiography, Memory Hold-the-Door, Buchan suggests that the character is based, in part, on Edmund Ironside, from Edinburgh, a spy during the Second Boer War.

Richard Hannay was one of the first modern spy thriller heroes and as such has heavily influenced the genre. Today, considered in the light of mainstream espionage fiction, Hannay appears to be badly clichéd—although, as he was created well before his attributes became clichéd, Hannay could be more accurately described as a seminal character of the spy thriller genre.

Hannay's first and best-known adventure, The Thirty-Nine Steps (1915), is set in the period immediately preceding the war. The two following wo Hannay novels set during the First World War when Hannay continued his undercover work against the Germans and their allies the Turks, were Greenmantle (1916) and Mr Standfast (1919). The other two stories, The Three Hostages (1924) and The Island of Sheep (1936) were set in the post war period when Hannay's opponents were criminal gangs.

After a brief legal career Buchan simultaneously began both his writing career and his political and diplomatic career, serving as a private secretary to the colonial administrator of various colonies in Southern Africa. He eventually wrote propaganda for the British war effort in the First World War. Once he was back in civilian life Buchan was elected Member of Parliament for the Combined Scottish Universities, but he spent most of his time on his writing career, notably writing The Thirty-Nine Steps and other adventure fiction.