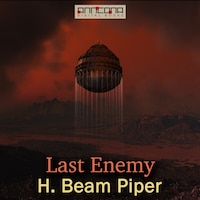 The last enemy was the toughest of all - and conquering him was in itself almost as dangerous as not conquering. For a strange pattern of beliefs can make assassination an honorable profession!

An undercover Paratimer has disappeared on assignment while in an alternate time line, and it’s up to Verkan Vall of the Paratime Police to save her. To do so, he must infiltrate a universe in which assassination is an honorable profession, and reincarnation a scientific fact. Will Verkan Vall survive in a world of killers and the undead?

Last Enemy is a part of his Paratime series. The title is a reference to 1 Corinthians 15:26, “The last enemy that shall be destroyed is death.”

It made its first appearance in August 1950, in Astounding Science Fiction magazine (now Analog).