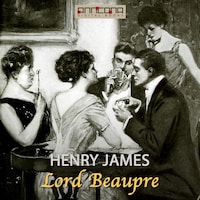 Lord Beaupre is a novella by Henry James, first published in Scribner's Magazine in 1892, as the first of three tales for Macmillan’s magazine.

What is a young man to do, when because of his pleasant disposition, and (of course) his considerable wealth, he finds himself besieged by bevies of eligible young women, some beautiful, some less so (some, even, his own cousins)?

How on earth is he to protect himself from their onslaught and that of their mothers?