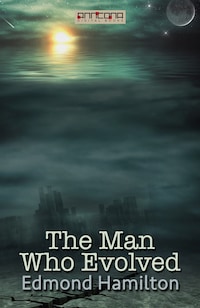 The Man Who Evolved

The Man Who Evolved is a science fiction short story by Edmond Hamilton that was first published in the April 1931 issue of Wonder Stories.

In his comments on the story in Before the Golden Age, Isaac Asimov called it the first science fiction short story (as opposed to novel) that impressed him so much it stayed in his mind permanently. In her introduction to The Best of Edmond Hamilton, Leigh Brackett called the story "a fine example of Hamilton's skill in encapsulating an enormous theme into the neat and perfect compass of a short story."

The Man Who Evolved is an interesting Sci-Fi novel that  deals with an experiment in evolution. It can easily be viewed as a horror story… This short story will appeal to fans of old 1950's scifi movies, as well as fans of the old Outer Limits series.

Edmond Moore Hamilton (1904-1977) was a popular science-fiction author during the "Golden Age" of American science fiction.

Hamilton’s career began as a regular and frequent contributor to Weird Tales magazine. The first hardcover publication of Science Fiction stories was a Hamilton compilation, and he and E. E. “Doc” Smith are credited with the creation of the Space Opera type of story.

Hamilton worked for DC Comics authoring many stories for their Superman and Batman characters. Hamilton was instrumental in the early growth of the Legion of Super-Heroes feature, as one of its first regular writers.