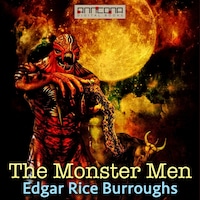 Dr. Arthur Maxon has a dream: to create an artificial human being! So the Doctor and his assistant, Carl von Horn begin their experiments, growing several living creatures in chemical vats, humanoid but mindless and ugly. But, the first twelve experiments have resulted only in grotesque, subhuman monsters.

But Number Thirteen is perfect, and will make an ideal mate for Virginia, Dr. Maxon’s only daughter. But his monstrous plan goes awry when it is disrupted by pirates and Maxon’s duplicitous assistant.

Experiment Number Thirteen indeed appears to result in a physically perfect man, but as soon as the scientists discover this an emergency distracts them. Experiment Number One has escaped and abducted Virginia…

Men or monsters? What were those thirteen hulking brutes Professor Maxon had created in his laboratory? Soulless, malformed, brainless they were, nevertheless composed of flesh and blood and endowed with the spark of Life. Only Number 13 was the redeeming feature of this gruesome experiment for he was a perfect specimen of a man but he, too, was soulless. Unconsciously he was the cause of the most diabolic plan Professor Maxon had yet concocted – his beautiful daughter Virginia was to marry this monster! Were he in America the mad professor’s plan might have been thwarted but what could a poor girl do, away off in savage Borneo?

Very effectively has Mr Burroughs used the age old quest for the secret of Life as the theme of this remarkable story. And he has also created a powerful new character, Bulan the Mighty. You’ll like him.

As is usual in Burroughs’ books, Action is the keynote of THE MONSTER MEN. Pirate raids, native uprisings, abductions, the savage fights of Maxon’s monsters, forced flights through unknown jungle country, are but a small portion of the “big doings”. Here’s a book that anyone, young or old, can heartily enjoy.

The Monster Men first appeared in print under the title of A Man Without a Soul in the November, 1913 issue of All-Story Magazine, and was first published in book form in hardcover in1929 under the present title. It has been reissued a number of times since by various publishers.

Edgar Rice Burroughs (1875 - 1950) was an American author, best known for his creation of the jungle hero Tarzan and the heroic Mars adventurer John Carter, although he produced works in many genres.