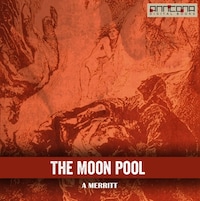 11h 57m
325 sidor
UppläsareMark Nelson
TypLjudbok, E-bok
Kategorier
RomanerEngelskaFictionSci-fi & FantasyClassics
Dela boken
The Moon Pool is a fantasy novel by A. Merritt. It originally appeared as two short stories in All-Story Weekly: "The Moon Pool" (1918) and its sequel, "Conquest of the Moon Pool" (1919). These were then reworked into this edition, a novel released in 1919. The protagonist, Dr. Goodwin, would later appear in Merritt's second novel The Metal Monster (1920).
The plot concerns an advanced race which has developed within the Earth's core. Eventually their most intelligent members create an offspring. This created entity encompasses both great good and great evil, but it slowly turns away from its creators and towards evil. The entity is called either the Dweller or the Shining One.
Eventually of the race which created it only three are left; these are called the Silent Ones, and they have been 'purged of dross' and can be described as higher, nobler, more angelic beings than are humankind. They have also been sentenced by the good among their race to remain in the world, and not to die, as punishment for their pride which was the source of the calamity called the Dweller, until such time as they destroy their creation - if they still can. And the reason they do not do so is simply that they continue to love it.
The Moon Pool is sometimes cited as an influence on "The Call of Cthulhu" by H.P. Lovecraft, which may in turn have itself influenced Merritt's later story Dwellers in the Mirage (especially the monster Khalk'ru). In particular, The Moon Pool is partly set on Nan Madol, a location which would, some claim, later inspire Lovecraft's R'lyeh.
Abraham Grace Merritt (1884 - 1943), known by his byline, A. Merritt, was an American Sunday magazine editor and a writer of fantastic fiction. The Science Fiction and Fantasy Hall of Fame inducted him in 1999, its fourth class of two deceased and two living writers.
Abraham Merritt is one of the forgotten masters of weird fiction. His work ranges from horror (Burn Witch Burn) to epic fantasy (The Ship of Ishtar). His writing could be described as a blend of dark fantasy and the 19th century tale of adventure in the style of H. Rider Haggard, with a dash of the Conan Doyle of the Professor Challenger stories. Merritt's stories typically revolve around conventional pulp magazine themes: lost civilizations, hideous monsters, etc. His heroes are gallant Irishmen or Scandinavians, his villains treacherous Germans or Russians and his heroines often virginal, mysterious and scantily clad. What sets Merritt apart from the typical pulp author, however, is his lush, florid prose style and his exhaustive, at times exhausting, penchant for adjective-laden detail.