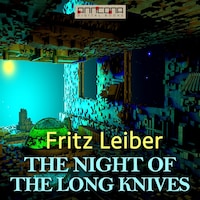 The Night of the Long Knives

The Night of the Long Knives is a science fiction novel by Fritz Leiber published in 1960.

”I was one hundred miles from Nowhere—and I mean that literally—when I spotted this girl out of the corner of my eye. I'd been keeping an extra lookout because I still expected the other undead bugger left over from the murder party at Nowhere to be stalking me.”

In a Post apocalyptic world, the few people left must be strong. And must not hesitate to kill. Of course, killing another Deathlander was one of the chief pleasures and urges of all the solitary wanders in this vast wasteland. Kill and kill again. But this other was a girl and that brought up the second great urge: sex.

Which was it to be today? Perhaps both? And who would walk away afterward?

The Night of the Long Knives was first published in Amazing Science Fiction Stories, January 1960.