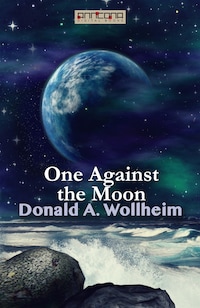 One Against the Moon

One Against the Moon is a science-fiction novel written by Donald A. Wollheim and first published in 1956.

In One Against the Moon Donald A. Wollheim spins a tale about a stowaway, on the first rocket to the moon! Trapped in an underground cavern of the moon, Robin Carew faced possible death-alone!

Starvation was postponed only briefly. He had the two rabbits and a monkey that had accompanied him in the untested atomic rocket not designed for human passengers. Rescue was unlikely. No one had discovered him hidden within the rocket before the blast-off.

He could rely only on himself. From the moment this latter-day Robinson Crusoe discovers edible plants within the lightless cavern, hope of survival grows in him. An underground river leads him to other caverns, where he encounters weird creatures and another being-one who speaks in an incomprehensible language.

Thus begins a series of remarkable adventures, climaxed by the arrival of a second rocket that brings both danger and good fortune.

Donald A. Wollheim (1914 -1990) was an American science fiction editor, publisher, writer, and fan. A founding member of the Futurians, he was a leading influence on science fiction development and fandom in the 20th century United States.