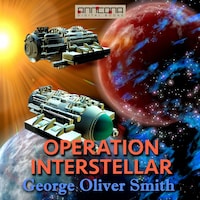 Haedaecker’s Theory claims that real-time communications across space is impossible.

Paul sets out to prove his theory but there are those who don’t want him to succeed.

Follow Paul’s adventures while he tries to prove his theory correct in the face of stiff opposition from those who do not want him to succeed.

Smith wrote mainly about outer space, with such works as Operation Interstellar (1950), Lost in Space (1959), and Troubled Star (1957). Smith continued regularly publishing science fiction novels and stories until 1960. He was given the First Fandom Hall of Fame award in 1980.