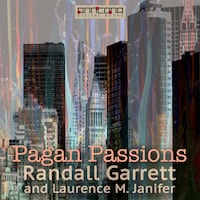 The Gods and Goddesses of Ancient Greece and Rome had returned to Earth -- with all their awesome powers intact. Overnight, Earth was transformed. War on any scale was outlawed, along with boom-and-bust economic cycles, and prudery. No change was more startling than the face of New York, where the Empire State Building became the Tower of Zeus.

In this totally altered world, William Forrester is an acolyte of Athena, Goddess of Wisdom, and a teacher of history. Only Maya Wilson, one of his students and a worshipper of Venus, Goddess of Love, had a different sort of grading in mind. Maya is the first of the many Trials of Forrester, every bit as mighty and perilous as the Labors of Hercules. In love with Gerda Symes (like him, a devotee of Athena and a frequenter of the great Temple of Pallas Athena -- formerly known as the 42nd Street Library) and dedicated to the pleasures of the mind -- Forrester falls under the soft, compelling pressure of soft, compelling devotees of Venus and Bacchus. He's going to be in need of all the strength that he and his Goddess, the beautiful and intellectual Athena, can muster!

Into this sensuous strife stride the Temple Myrmidons -- religious cops sworn to obey orders without question or hesitation -- with a pickup order for William Forrester. Where he is taken, what happens to him, and the truly fantastic discoveries he makes about himself and the Gods and Goddesses ... here are the ingredients that make up this science fiction novel of suspense, intrigue, mystery and danger!

Laurence M. Janifer (1933-2002) was an American science fiction author, with a career spanning over 50 years. Though his first published work was a short story in Cosmos magazine in 1953, his career as a writer can be said to have started in 1959 when he began writing for Astounding and Galaxy Science Fiction. He co-wrote the first novel in the ”Psi-Power” series: Brain Twister, written with Randall Garrett under the joint pseudonym Mark Phillips.