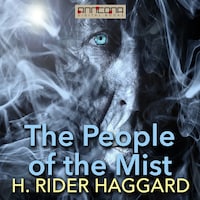 The People of the Mist

The People of the Mist is a classic lost race fantasy novel written by H. Rider Haggard.

This is the tale of a British adventurer seeking wealth in the wilds of Africa, finding romance, and discovering a lost race and its monstrous god.

The penniless Leonard Outram attempts to redress the undeserved loss of his family estates and his fiancee by seeking his fortune in Africa. In the course of his adventures, he and his Zulu companion Otter save a young Portuguese woman, Juanna Rodd, together with her nursemaid Soa, from slavery. Leonard and Juanna are plainly attracted to each other, but prone to bickering, and their romance is impeded by the watchful and jealous Soa.

The protagonists seek the legendary People of the Mist, said to possess a fabulous hoard of jewels. On finding them, they immediately become embroiled in the turbulent political affairs of the lost race, which is driven by a power-struggle between its king and the priests of its giant crocodile god. The heroic Outram can do little more than react to events. The action climaxes in a hair-raising escape by “tobogganing” a large flat stone down a steep glacier.

The People of the Mist was first published serially in the weekly magazine Tit-Bits, between December 1893 and August 1894; the first edition in book form was published in 1894.