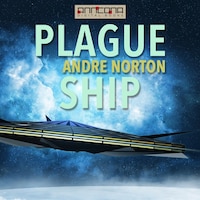 Plague Ship is a science fiction novel by Andre Norton.

A fast-moving suspense tale, full of unusual detail and unexpected turns. Several highlights make the book really shine: the sunset gorp hunt on the reefs of an oily sea; a raid on an asteroid's emergency station; and a landing in the Big Burn, resulting in an encounter with the mutant life-forms that reside there...

The main protagonist of the novel is Dane Thorson, Cargo-master-apprentice on the Free Trader rocket ship the Solar Queen. Free Traders take on trading contracts on remote and recently discovered planets, which can be dangerous and unpredictable.

Lured by its exotic gems, the space trader Solar Queen lands on the little-known planet of Sargol, only to find the ruthless Inter-Solar Company there ahead of them. Adapting quickly to the culture of Sargol’s feline inhabitants, the crew of the Queen beat out their rivals and successfully make a deal with the natives. But soon after takeoff, the Queen’s crew is stricken with a plague, and they are now banned from landing on any inhabited planet. Will the Queen’s crew save themselves, or be condemned to drift forever through space?

Plague Ship was first published in 1956. The book is the second volume of the author's Solar Queen series.

Andre Alice Norton (1912-2005) was an American writer of science fiction and fantasy with some works of historical fiction and contemporary fiction. She wrote primarily under the pen name Andre Norton, but also under Andrew North and Allen Weston. She was the first woman to be Gandalf Grand Master of Fantasy, first to be SFWA Grand Master, and first inducted by the Science Fiction and Fantasy Hall of Fame. In 2005, the Science Fiction and Fantasy Writers of America, announced the creation of the Andre Norton Award, to be given each year for an outstanding work of fantasy or science fiction for the young adult literature market.