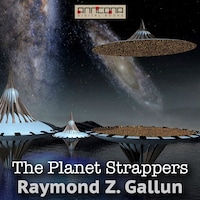 The Planet Strappers is a science fiction novel by Raymond Z. Gallun first published in 1961.

“Out There – the world’s first space colony – adventures and dangers beyond human ken!”

A Million Miles Beyond the Moon...

... Nelson and Ramos sped on toward Mars in their tiny plastic-bubble spacecraft. They were on the alert—it didn't pay to take anything for granted in the Big Vacuum....

The way between the worlds was mostly empty space—except for the outlaws of the void who drifted, patiently and vengefully waiting for a victim, then struck!

Nelsen and Ramos tensed—blips on the radar screen! Maybe meteors... More blips—and fist-sized chunks of rock flicked through their fragile vehicles. Air puffed out ... and Nelson and Ramos were fighting for their lives...

... A Million Miles Beyond the Moon!

The Planet Strappers started out as The Bunch, a group of student-astronauts in the back room of a store in Jarviston, Minnesota.

They wanted off Earth, and they begged, borrowed and built what they needed to make it. They got what they wanted--a start on the road to the stars--but no one brought up on Earth could have imagined what was waiting for them Out There!

This is a classic SF story, well told with some pretty good characters. Even the 1961 projection of space science holds up with only the slightest amount of squinting.

Raymond Zinke Gallun (1911-1994) was an American science fiction writer and one of the early sci-fi pulp writers who popularized the genre. His first book, People Minus X, was published in 1957, followed by The Planet Strappers in 1961. Gallun was honored with the I-CON Lifetime Achievement Award in 1985 at I-CON IV; the award was later renamed The Raymond Z. Gallun Award. His pen names includes Dow Elstar, E.V. Raymond and William Callahan.