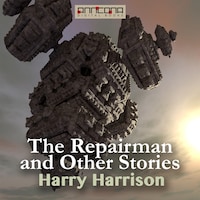 The Repairman and other Stories

The Repairman and Other stories is a science fiction short story compilation by Harry Harrison.

This is a collection of 3 of Harry Harrison marvelous early stories that were published in Galaxy, Analog and Fantastic Universe.

The Repairman (1958), (35 min.), is a straight fun SF story of a man getting a job done. It is most typical of his later style in series like the Stainless Steel Rat;

“Being an interstellar trouble shooter wouldn’t be so bad … if I could shoot the trouble! “

Toy Shop (1962), (11 min.), is a short piece exploring bureaucratic blindness and one ingenious way around it.

“The gadget was strictly, beyond any question, a toy. Not a real, workable device. Except for the way it could work under a man's mental skin.... “

The Velvet Glove (1956), (47 min), is a favorite for its writing style, fun perspective, sly social commentary on the scene in 1956 and just plain delightful imagination. And Harrison manages to pack excitement and mystery in at the same time.

SF writer and editor Harry Harrison explores a not too distant future where robots—particularly specialist robots who don't know their place—have quite a rough time of it. True, the Robot Equality Act had been passed—but so what?

“New York was a bad town for robots this year. In fact, all over the country it was bad for robots....”

Harry Max Harrison (1925-2012) was an American science fiction author. Harrison is known for his writing, particularly his humorous and satirical science fiction, such as the Stainless Steel Rat series and the novel Bill, the Galactic Hero (which satirises Robert A. Heinlein's Starship Troopers). Harrison is also known for his novel Make Room! Make Room! (1966). The novel was the rough basis for the motion picture Soylent Green (1973).