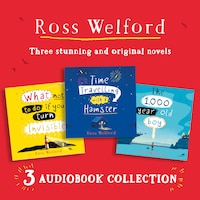 TIME TRAVELLING WITH A HAMSTER
’My dad died twice. Once when he was thirty-nine and again four years later when he was twelve.’

On Al Chaudhury’s twelfth birthday his beloved Grandpa Byron gives him a letter from Al’s late father. In it Al receives a mission: travel back to 1984 in a secret time machine and save his father’s life.

WHAT NOT TO DO IF YOU TURN INVISIBLE
Turning invisible at will: it’s one way of curing your acne. But far more drastic than thirteen year-old Ethel Leatherhead intended when she tried a combination of untested medicines and a sunbed.

It’s fun at first, being invisible. And aided by her friend Boydy, she manages to keep her extraordinary ability secret. Or does she…?

THE 1,000-YEAR-OLD BOY
Alfie Monk is like any other nearly teenage boy – except he’s 1,000 years old and can remember the last Viking invasion of England. Obviously no one believes him.

So, when everything Alfie knows and loves is destroyed in a fire, and the modern world comes crashing in, Alfie embarks on a mission to find friendship, acceptance, and a different way to live… which means finding a way to make sure he will eventually die.