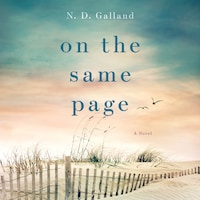 On the Same Page

From the critically acclaimed author of Stepdog and The Fool’s Tale comes a romantic comedy that tells the story of one journalist secretly juggling two bylines for competing newspapers on a small island.

One island, two newspapers, and the reporter who played them both

Johanna Howes is a Martha’s Vineyard native who left the Island at 18 and moved to New York City to become a writer. Now in her 30s, she reluctantly returns to care for her cranky, injured uncle. Needing income, she freelances for one island newspaper (the one Uncle Hank likes). But that doesn’t cover her bills, so she creates an alter ego to write for the rival paper (the one Uncle Hank doesn’t like).

The Vineyard has a split personality – part elite summer resort, part working-class small town. The Island’s two papers –the Journal and the Newes – are famously at odds with each other and reflect the seasonal schism in their reporting. Everybody’s shoulder seems to have a chip on it.

Johanna gets personally ensnared in a messy situation she’s assigned to write about for both papers: a wealthy seasonal resident sues the town for the right to use his private helicopter. When Johanna agrees to a cup of coffee with the witty, handsome stranger she meets at a zoning board meeting, she has no idea she’s made a date with Orion Smith, helicopter owner. Orion, meanwhile, doesn’t realize Johanna is the niece of his political nemesis, Henry Holmes.

Johanna scrambles to keep her disparate identities separate from each other in the tiny off-season community, but everything she does just gets her into deeper trouble…and further complicates her budding romance with the exasperating charmer she’s doing her best not to fall for.

A story about the half-truths we tell ourselves – and others – especially when our hearts are on the line.