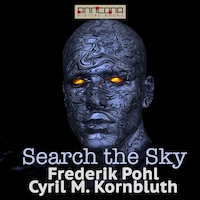 Search the Sky is a satirical science fiction novel written by Frederik Pohl and Cyril M. Kornbluth and first published in 1954 by Ballantine Books.

Ross was a junior trader on Halsey's Planet, and had great prospects but was not happy at all. Everything smelled of decay. The whole planet seemed to be slowly disappearing, the population dwindling month by month and year by year and yet no one seemed to care or even notice.

Something was very, very wrong. When the first interstellar transport in 30 years arrived on Halsey's Planet, it brought things to a head. The ship had touched on six other colony worlds - and all six had been devoid of human life. Where was everybody? It was almost as if humankind, when separated by cosmic distances from Mother Earth, could not survive.

He didn't know the answer but he knew it all smelled highly of decay. Decay and Rot.

This highly praised novel by C. M. Kornbluth and Frederick Pohl, first published in 1954, was seen as a wonderful satire on various trends in the society of the 1950's.

The Space Merchants was not only one of the best-reviewed science-fiction novels in 1953, it was one of the most widely reviewed. Favorable notices appeared in journals ranging from Printer’s Ink to science-fiction magazines, from Tide magazine to the great national dailies. That novel firmly established Messrs. Pohl and Kornbluth as a team, although they had collaborated before under pen names and had established reputations singly. Their new novel, Search the Sky, has the same wit, the same passages of genuinely beautiful writing and—what is most important and most characteristic—the same underlying concern for human beings, whether they are on future Madison Avenues or in the outer galaxies.

This is Mr. Kornbluth’s seventh published novel. Two were written in collaboration with Judith Merril under the pen name “Cyril Judd”; one was the notable Takeoff (Doubleday, 1952); one was not science fiction; one was his last collaborative effort with Mr. Pohl; and his most recent was The Syndic (Doubleday, 1953). Mr. Kornbluth, still under thirty, now lives in an upstate New York farmhouse with his wife and child where he devotes himself to writing.

This is Mr. Pohl’s sixth published book. Two of them were reprint collections which he edited and two others were the now-celebrated first and second volumes of Star Science Fiction Stories, collections of new stories published by Ballantine Books. At 34, Mr. Pohl lives in a large old house on the Jersey shore—“five rooms for me, four for my wife and two apiece for the children.” He has three more books forthcoming in 1953: two anthologies and his first solo novel.

Frederik George Pohl, Jr. (1919-2013) was an American science fiction writer and editor, with a career spanning more than seventy-five years. From about 1959 until 1969, Pohl edited Galaxy and its sister magazine If; the latter won three successive annual Hugo Awards as the year's best professional magazine. He won four Hugo and three Nebula Awards.