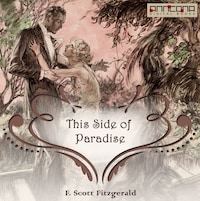 This Side of Paradise

9h 42m
272 sidor
UppläsareMark F. Smith
TypLjudbok, E-bok
Kategorier
RomanerEngelskaFictionClassics
Dela boken
This Side of Paradise is the debut novel of F. Scott Fitzgerald. Published in 1920, and taking its title from a line of the Rupert Brooke poem Tiare Tahiti, the book examines the lives and morality of post-World War I youth. Its protagonist, Amory Blaine, is an attractive Princeton University student who dabbles in literature. The novel explores the theme of love warped by greed and status-seeking.

In the summer of 1919, after less than a year of courtship, Zelda Sayre broke up with the 22-year-old Fitzgerald. After a summer of heavy alcohol use, he returned to St. Paul, Minnesota where his family lived, to complete the novel, hoping that if he became a successful novelist he could win Zelda back. While at Princeton, Fitzgerald had written an unpublished novel called The Romantic Egotist and ultimately 80 pages of the typescript of this earlier work ended up in This Side of Paradise. Upon the acceptance of his novel for publication he went and visited Zelda and they resumed their courtship. His success imminent, she agreed to marry him.

This Side of Paradise was published on March 26, 1920 with a first printing of 3,000 copies. The initial printing sold out in three days. On March 30, four days after publication and one day after selling out the first printing, Fitzgerald wired for Zelda to come to New York and get married that weekend. Barely a week after publication, Zelda and Scott married in New York on April 3, 1920.

Francis Scott Key Fitzgerald (1896-1940) was an American author of novels and short stories, whose works are the paradigmatic writings of the Jazz Age, a term he coined. He is widely regarded as one of the greatest American writers of the 20th century. Fitzgerald is considered a member of the "Lost Generation" of the 1920s. He finished four novels: This Side of Paradise, The Beautiful and Damned, The Great Gatsby (his most famous), and Tender Is the Night. A fifth, unfinished novel, The Love of the Last Tycoon, was published posthumously. Fitzgerald also wrote many short stories that treat themes of youth and promise along with age and despair.