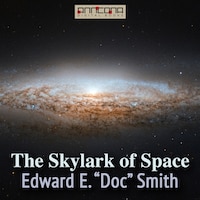 The Skylark of Space

The Skylark of Space is a science fiction novel and space opera by American author E. E. ”Doc” Smith and Lee Hawkins Garby, first published in 1928.

The Skylark of Space is one of the earliest novels of interstellar travel and is considered a classic of pulp science fiction. Originally serialized in 1928 in the magazine Amazing Stories it is often categorized as the first literary space opera, complete with protagonists perfect in mind, body, and spirit, who fight against villains of absolute evil.

The novel begins with the accidental discovery, in a Government laboratory in Washington D. C., of a form of clean nuclear power. Our hero, Dr. Richard Seaton, uses this power to build first a flying belt and then an interstellar spaceship.

When his government coworkers do not believe him, Seaton acquires rights to his discovery from the government and commercializes it with the aid of his friend, millionaire inventor Martin Crane. A former colleague, Dr. Marc DuQuesne, joins with the unscrupulous World Steel Corporation to try to steal Seaton's invention.

The Skylark of Space is considered to be one of the earliest novels of interstellar travel and the first example of space opera. The novel was followed by several sequels, beginning with Skylark Three.

Frederik Pohl said of The Skylark of Space, "With the exception of the works of H. G. Wells, possibly those of Jules Verne—and almost no other writer—it has inspired more imitators and done more to change the nature of all the science fiction written after it than almost any other single work."

Though the original idea for the novel was Smith's, he co-wrote the first part of the novel with Lee Hawkins Garby, the wife of his college classmate and later neighbor Carl Garby.

This is the serialized version from Amazing Stories August, September and October 1928. Note that there were significant changes between the 1928 serialized magazine publication and the 1946 hardcover, and between the early hardcovers and the late 1950s and later paperback editions.

Lee Hawkins Garby (1892 - 1953) was acknowledged in some circles as an early female writer of science fiction. She made no known contributions to the field beyond her involvement with The Skylark of Space, the first science fiction story in which humans left the solar system, of which she was credited as co-author in the first edition.