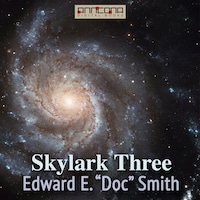 Skylark Three is a science fiction novel and space opera by American author E. E. ”Doc” Smith. It was first published in 1930.

Skylark Three is the second novel in the Skylark series. Originally serialized through the Amazing Stories magazine in 1930, it was first collected in book form in 1948.

The novel concerns Richard Seaton and his allies who have encounters with aliens while fighting DuQuesne and the Fenachrone.

In this sequel to The Skylark of Space, danger again waits for genius inventor and interplanetary adventurer Dr. Richard Seaton. Seaton’s allies on the planet Kondal are suffering devastating attacks by the forces of the Third Planet. Even worse, the menacing Fenachrones are threatening to conquer the galaxy and wipe out all who oppose them.

And don’t forget Seaton’s arch-nemesis, DuQuesne, who embarks on a mission of his own.

Featuring even more technological wizardry, alien worlds, and all-out action than in the first novel, Skylark Three is wieved as the high point of the Skylark series.

Skylark Three is the second book in the Skylark series and is set a year after the events of The Skylark of Space, during which year antagonist Marc "Blackie" DuQuesne has used the wealth obtained in the previous book to buy a controlling interest in the story's 'World Steel Corporation', a large company known for its ruthless attitude.

This is the serialized version from Amazing Stories in August, September and October 1930.