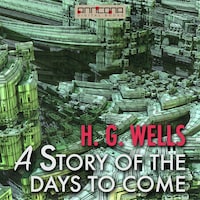 A Story of the Days To Come

A Story of the Days To Come is a science fiction novella by H. G. Wells that was first published in the June to October 1897 issues of The Pall Mall Magazine.

Set in London in the early 22nd century, this novella depicts the troubles of two lovers, Denton and Elizabeth. Elizabeth is a well-to-do woman with many connections, but Denton is only a middle-class worker. Elizabeth's father strongly disapproves of the match, and orders a hypnotist to hypnotize his daughter into thinking that she is in love with another.

When the scheme is found out, Denton and Elizabeth elope, leading to a string of events that take them from the top of London society to horrifying depths of "underneath" London.

Set in a dystopian future London of the 22nd century the novella explores the implications of excessive urbanization, class warfare, and advances in the technology of medicine, communication, transportation, and agriculture. Like When the Sleeper Wakes, published in the same year, the stories extrapolate the trends Wells observed in nineteenth-century Victorian London two hundred years into the future.

The London of the early 22nd century is over 30 million people in population, with the lower classes living in subterranean dwellings, and the middle and upper classes living in skyscrapers and largely communal accommodations. Moving walkways interconnect the city, with fast air-travel and superhighways available between cities. The countryside is largely abandoned.

The novella was later included in an 1899 collection of Wells's short stories, Tales of Space and Time.

Herbert George "H. G." Wells (1866-1946) was an English writer, now best known for his work in the science fiction genre. He was also a prolific writer in many other genres, including contemporary novels, history, politics and social commentary, even writing textbooks and rules for war games.

Wells is one person sometimes called "The Father of Science Fiction", as are Jules Verne and Hugo Gernsback. His most notable science fiction works include The War of the Worlds, The Time Machine, The Invisible Man and The Island of Doctor Moreau.