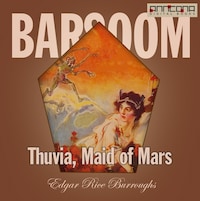 5h 13m
158 sidor
UppläsareThomas A. Copeland
TypLjudbok, E-bok
SerieThe Barsoom series (del 4)
Kategorier
RomanerRomanerScience fictionEnglishFantasy & Science fiction
Dela boken
Thuvia, Maid of Mars is a science fantasy novel by Edgar Rice Burroughs, the fourth of the Barsoom series. The principal characters are the Son of John Carter of Mars, Carthoris, and Thuvia of Ptarth, each of whom appeared in the previous two novels.
While typical in many ways of Burrough's Barsoom novels, it also includes some inventive elements. In this novel the focus shifts from John Carter, Warlord of Mars, and Dejah Thoris of Helium, protagonists of the first three books in the series, to their son, Carthoris, prince of Helium, and Thuvia, princess of Ptarth. Helium and Ptarth are both prominent Barsoomian city state/empires, and both Carthoris and Thuvia were secondary characters in the previous novel. Its plot devices are similar to the previous Martian novels, involving the kidnapping of a Martian princess.
This time John Carter's son Carthoris is implicated. It does however have some inventive and original ideas, including an autopilot and collision detection device for Martian fliers, and the creation of the Lotharians, a race of ancient martians who have become adept at telepathic projection, able to create imaginary warriors that can kill, and sustain themselves through thought alone.
The story was first published in All-Story Weekly as a serial in three parts in April 1916. It was later published as a complete novel by A. C. McClurg in October, 1920.
Barsoom is a fictional representation of the planet Mars created by American pulp fiction author Edgar Rice Burroughs. The first Barsoom tale was serialized as Under the Moons of Mars in 1912, and published as a novel as A Princess of Mars in 1917. Ten sequels followed over the next three decades, further extending his vision of Barsoom and adding other characters.
The world of Barsoom is a romantic vision of a dying Mars. Writers and science popularizers like Camille Flammarion, who was convinced that Mars was at a later stage of evolution than Earth and therefore much more dry, took the ideas further and published books like Les Terres du Ciel (1884), which contained illustrations of a planet covered with canals. Burroughs gives credits to him in his writings, and goes as far as to say that he based his vision of Mars on that of Flammarion. John Carter is transported to Mars in a way described by Flammarion in Urania (1889), where a man from earth is transported to Mars as an astral body where he wakes up to a lower gravity, two moons, strange plants and animals and several races of advanced humans. In The Plurality of Inhabited Worlds and Lumen, he further speculates about plant people and other creaturs on far away planets, elements that would later appear in the Barsoom stories.
The Barsoom series, where John Carter in the late 1800s is mysteriously transported from Earth to a Mars suffering from dwindling resources, has been cited by many well-known science fiction writers as having inspired and motivated them in their youth, as well as by key scientists involved in both space exploration and the search for extraterrestrial life. Elements of the books have been adapted by many writers, in novels, short stories, comics, television and film.
Edgar Rice Burroughs (1875-1950) was an American author, best known for his creation of the jungle hero Tarzan and the heroic Mars adventurer John Carter, although he produced works in many genres.