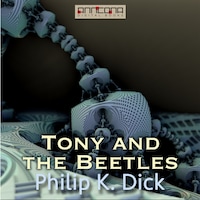 Tony and the Beetles

Tony and the Beetles is a science fiction short story by Philip K. Dick, first published in 1953.

Tony and the Beetles takes place far in the future when Earth's enormous colonial empire is well established but the question is, how long can it last?

Tony Rossi lives with his father Joseph Rossi and mother Leah Rossi in the Sun of Betelguese. Meanwhile at Orion, the earthlings are waging a fierce battle for power with the beetle fleet. When the tide of hostilities turn against the colonisers from earth, Toni's world begins taking a turn for the worse.

Tony and the Beetles was first published in Orbit volume 1 number 2, 1953.