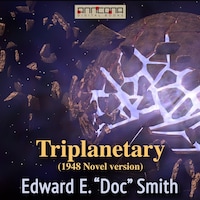 Triplanetary (NOVEL version) is a science fiction novel and space opera by American author E. E. ”Doc” Smith. It was first serialized in the magazine Amazing Stories in 1934.

The novel covers several episodes in an eons-long human breeding project by the super-intelligences of the Arisians. This alien race is breeding two genetic lines to become the ultimate weapon in Arisia's cosmic war with their arch-enemies, the Eddorians.

“Doc” E.E. Smith pretty much invented the space opera genre, and Triplanetary is a good and well-known example. Physics, time, and politics never stand in the way of a plot that gallops ahead without letup. Having earned a PhD in chemical engineering, it’s understandable that the heroes of Smith’s story are all scientists.

He didn’t want to be constrained by the limits of known science, however, so in his hands the electromagnetic spectrum becomes a raw material to be molded into ever-more amazing and lethal forms, and the speed of light is no bar to traveling through the interstellar void.

Enjoy this story of yesteryear, set in tomorrow, where real women ignite love at a glance, real men achieve in days what governments manage in decades, and aliens are an ever-present threat to Life-As-We-Know-It!

Triplanetary was first serialized in Amazing Stories in 1934. After the Lensman series became popular, Smith took his Triplanetary story and turned it into the first of the Lensman series, using it as a prequel to give the back story for the protaganists in the Lensmen series. He added 6 new chapters, doubling it in size and it's really a different book from the serialized novel, being published 14 years after the first. The expanded Triplanetary was published in book form in 1948.

The second prequel, First Lensman, was a new original novel published in 1950.

This is the 1948 expanded and reworked edition.

Edward Elmer Smith (also E. E. Smith or E. E. ”Doc” Smith; 1890-1965) was an American food engineer (specializing in doughnut and pastry mixes) and an early science-fiction author, best known for the Lensman and Skylark series. Smith's novels are generally considered to be classic space operas, and he is sometimes called the first of the three ”novas” of 20th-century science fiction (with Stanley G. Weinbaum and Robert A. Heinlein as the second and third novas).