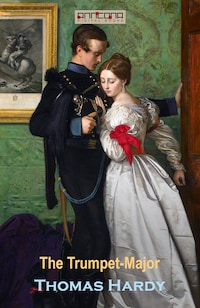 The Trumpet-Major is a novel by English author Thomas Hardy published in 1880, and his only historical novel.

Our heroine, Anne Garland, lives quietly in a rural community deep in the English countryside, However, the arrival of several regiments preparing for an expected invasion brings colour and chaos to the county.

A graceful and charming young woman, Anne is pursued by three suitors: John Loveday, the trumpet-major in a British regiment, honest and loyal; his brother Robert, a merchant seaman and womaniser, and Festus Derriman, the cowardly son of the local squire. Unusually for a Hardy novel, the ending is not entirely tragic; however, there remains an ominous element in the probable fate of one of the main characters.

The novel is set in Weymouth during the Napoleonic wars; the town was then anxious about the possibility of invasion by Napoleon. Of the two brothers, John fights with Wellington in the Peninsular War, and Bob serves with Nelson at Trafalgar. The Napoleonic Wars was a setting that Hardy would use again in his play, The Dynasts, and it borrows from the same source material.

Thomas Hardy (1840-1928) was an English novelist and poet. A Victorian realist, in the tradition of George Eliot, he was also influenced both in his novels and poetry by Romanticism, especially by William Wordsworth.

Charles Dickens is another important influence on Thomas Hardy. Like Dickens, he was also highly critical of much in Victorian society, though Hardy focused more on a declining rural society.

Initially he gained fame as the author of such novels as Far from the Madding Crowd (1874), The Mayor of Casterbridge (1886), Tess of the d'Urbervilles (1891), and Jude the Obscure (1895). However, since the 1950s Hardy has been recognized as a major poet, and had a significant influence on The Movement poets of the 1950s and 1960s, including Phillip Larkin.

The bulk of his fictional works, initially published as serials in magazines, were set in the semi-fictional region of Wessex and explored tragic characters struggling against their passions and social circumstances. Hardy's Wessex is based on the medieval Anglo-Saxon kingdom and eventually came to include the counties of Dorset, Wiltshire, Somerset, Devon, Hampshire, and much of Berkshire, in south west England.