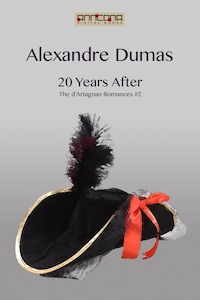 807 sidor
FörfattareAlexandre Dumas
TypE-bok
SerieThe D'Artagnan Romances (del 2)
Kategorier
RomanerFaktaHistoriaKlassiker & PoesiUtländska klassikerEngelskaFiction
Dela boken
Twenty Years After (French: Vingt ans après) is a novel by Alexandre Dumas, père, first serialized from January to August, 1845. A book of the D'Artagnan Romances, it is a sequel to The Three Musketeers and precedes The Vicomte de Bragelonne (which includes the sub-plot, Man in the Iron Mask).
The novel follows events in France during La Fronde, during the childhood reign of Louis XIV, and in England near the end of the English Civil War, leading up to the victory of Oliver Cromwell and the execution of King Charles I. Through the words of the main characters, particularly Athos, Dumas comes out on the side of the monarchy in general, or at least the text often praises the idea of benevolent royalty. His musketeers are valiant and just in their efforts to protect young Louis XIV and the doomed Charles I from their attackers. This book is the least well-known of the Musketeer saga but works effectively as a sequel, with reappearances by most main characters (or children of main characters) and a number of subplots.
The d'Artagnan Romances are a set of three novels by Alexandre Dumas telling the story of the musketeer d'Artagnan from his humble beginnings in Gascony to his death as a marshal of France in the Siege of Maastricht in 1673.
The three novels are:
The Three Musketeers, set in 1625; first published in 1844. Dumas claimed it was based on manuscripts he had discovered in the Bibliothèque Nationale.
Twenty Years After, set in 1648; serialized from January to August, 1845.
The Vicomte of Bragelonne: Ten Years Later, set between 1660 and 1673; serialized from October 1847 to January 1850. This vast novel has been split into four volumes; The Vicomte de Bragelonne, Ten Years Later, Louise de la Vallière and The Man in the Iron Mask.
Alexandre Dumas, (1802-1870), also known as Alexandre Dumas, père, was a French writer, best known for his historical novels of high adventure. Translated into nearly 100 languages, these have made him one of the most widely read French authors in the world. Many of his novels, including The Count of Monte Cristo, The Three Musketeers, Twenty Years After, and The Vicomte de Bragelonne: Ten Years Later were originally published as serials. His novels have been adapted since the early twentieth century for nearly 200 films. Dumas' last novel, The Knight of Sainte-Hermine, unfinished at his death, was completed by a scholar and published in 2005, becoming a bestseller. It was published in English in 2008 as The Last Cavalier.
Prolific in several genres, Dumas began his career by writing plays, which were successfully produced from the first. He also wrote numerous magazine articles and travel books; his published works totaled 100,000 pages. In the 1840s, Dumas founded the Théâtre Historique in Paris.