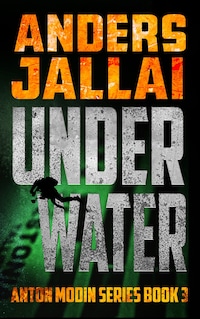 403 sidor
FörfattareAnders Jallai
TypE-bok
SerieAnton Modin English (del 3)
Kategorier
SpänningDeckareEnglishCrime
Dela boken
”The scars had not healed, and for that reason he thought it was right and necessary. He wanted to have another shot at what went wrong in 1994, when he asked his family to stay in the cabin while he went to see what was happening up on deck. Once he had left, there had been no return. He would make good for it now, after 16 years of pain, nightmares, and anxiety. He was going to check out the hole the explosion had made in the bow of the ferry, so he’d finally know why the ship sank so fast—faster than he could have imagined.
This was going to be his first mission. The briefcase was second.
One hundred and sixty feet. His diving computer beeped. They would soon be able to make out the wreck. He shone his flashlight straight downward, then forward, and for a moment, he thought he could make out an orange lifeboat.” (Under Water, chapter 139)
Under Water, is the third and final book in Anders Jallai’s Anton Modin trilogy. Often compared to Stieg Larsson's The Girl Who Kicked the Hornet's Nest, some call Anders Jallai’s Under Water the best political thriller ever written in Sweden.
“Anders Jallai’s superbly and skillfully written thriller (Enemy Of The State) is on my list of the top five Swedish thrillers published so far.”
Iwan Morelius, Swedish Academy of Crime Novels.
”Anders Jallai, a Swedish Frederick Forsyth, only better, should have a worldwide audience, while his choice of subject anchors him firmly within Nordic reality.”
Ragnhild Artimo, Forum for Economy and Technology, Helsinki
“This work of fiction contains a core of truth.”
Olof Frånstedt, Chief of Swedish Security Service 1965-1978
”Anders Jallai is comparable to writers like John le Carré and Fredric Forsyth. (…) He is a great stylist and knows how to mesmerize the reader.”
Mats Garme, Ölandsbladet, Swedish tabloid
“Incredibly skillfully written.”
Expressen, Sweden´s leading tabloid
ABOUT THE AUTHOR:
Anders Jallai, Sweden's Number 1 author of political thrillers, draws from his experiences with the Swedish Navy Seals and the Swedish Air Force in the final years of the Cold War. His background as a fighter pilot, a commercial airline captain, and a professional diver naturally flows into his edge-of-your-seat thrillers. His first three novels were originally published in Sweden.
Now, Anders Jallai's successful political thriller series about former Special Ops agent Anton Modin will be available in English. The series begins with Deep State, originally published in Sweden in 2010.