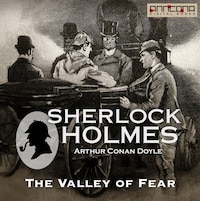 The Valley of Fear

The Valley of Fear is the fourth and final Sherlock Holmes novel by Sir Arthur Conan Doyle. It is based on the supposedly real-life exploits of the Molly Maguires and Pinkerton agent James McParland. The story was first published in the Strand Magazine between September 1914 and May 1915, and the first book edition was published in 1915.

The Valley of Fear, notable for Professor Moriarty's involvement, is set before "The Final Problem", the short story in which Moriarty was introduced.

Sir Arthur Conan Doyle (1859-1930) was a Scottish physician and writer, most noted for his stories about the detective Sherlock Holmes, generally considered a milestone in the field of crime fiction, and for the adventures of Professor Challenger. He was a prolific writer whose other works include science fiction stories, plays, romances, poetry, non-fiction and historical novels.

Sherlock Holmes is a London-based "consulting detective" whose abilities border on the fantastic, Holmes is famous for his astute logical reasoning, his ability to adopt almost any disguise, and his use of forensic science skills to solve difficult cases.

Holmes, who first appeared in publication in 1887, was featured in four novels and 56 short stories.