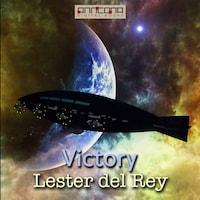 It seemed Earth was a rich and undefended planet in a warring, hating galaxy. Things can be deceptive though; children playing can be quite rough--but that ain't war, friend!

Victory is the story of an undefended Earth in a warring galaxy. An interesting story that starts out gritty then turns philosophical. A human captain returns to the planet he fought years to protect, and discovers it devastated, despite winning the war.

The humanoid aliens across the galaxy resent Earth's constant neutrality in their wars with hostile alien lifeforms. The captain shares their bitterness and can't wait to ship out to another war to escape the cowardice of his home planet.

Lester del Rey (1915 - 1993) was an American science fiction author and editor. He was the author of many books in the juvenile Winston Science Fiction series, and the editor at Del Rey Books, the fantasy and science fiction imprint of Ballantine Books.

Del Rey was awarded the 1972 E. E. Smith Memorial Award for Imaginative Fiction (for the Skylark) by the New England Science Fiction Association and a special 1985 Balrog Award for his contributions to fantasy, voted by fans and organized by Locus Magazine. The Science Fiction Writers of America named him its 11th SFWA Grand Master in 1990.