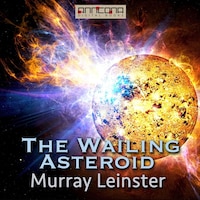 The Wailing Asteroid is a science fiction novel by Murray Leinster first published in 1960.

It presents the theme of the lone inventor who saves Earth from cosmic danger and introduces Humanity to an unknown civilization. The novel was adapted for film as The Terrornauts in 1967.

There was no life on the asteroid, but the miles of rock-hewn corridors through which the earth party wandered left no doubt about the purpose of the asteroid.

It was a mighty fortress, stocked with weapons of destruction beyond man's power to understand.

And yet there was no life here, nor had there been for untold centuries.

What race had built this stronghold? What unimaginable power were they defending against? Why was it abandoned? There was no answer, all was dead.

For in a room above the tomb-like fortress a powerful transmitter beamed its birdlike, fluting sounds toward earth. Near it, on a huge star-map of the universe, with light-years measured by inches, ten tiny red sparks were moving, crawling inexorably toward the center.

Moving, at many times the speed of light, with the acquired mass of suns ... moving, on a course that would pass through the solar system.

The unknown aliens would not even see our sun explode from the force of their passing, would not even notice the tiny speck called Earth as it died...

Murray Leinster (1896-1975) was a pen name of William Fitzgerald Jenkins, an award-winning American writer of science fiction and alternate history. He wrote and published over 1,500 short stories and articles, 14 movie scripts, and hundreds of radio scripts and television plays.