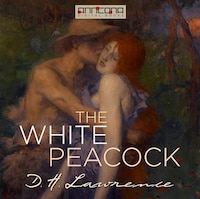 The White Peacock is a novel by D. H. Lawrence published in 1911. Lawrence started the novel in 1906 and then rewrote it three times. The early versions had the working title of Laetitia.

Maurice Greiffenhagen (1862-1931)'s 1891 painting, 'An Idyll', inspired D H Lawrence's novel The White Peacock. The painting had "a profound effect" on the author, who wrote: As for Greiffenhagen's 'Idyll', it moves me almost as if I were in love myself. Under its intoxication, I have flirted madly this Christmas.

Lawrence's first novel is set in the Eastwood area of his youth and is narrated in the first person by a character named Cyril Beardsall and focuses in particular on the relationship of his sister Lettie with two admirers, the more handsome and down to earth George and the more effete gentleman Leslie. It involves themes such as the damage associated with mismatched marriages, and the border country between town and country. A misanthropic gamekeeper makes an appearance, in some ways the prototype of Mellors in Lawrence's last novel, Lady Chatterley's Lover. The book includes some notable description of nature and the impact of industrialisation on the countryside and the town. Its provincialism may be compared with the novels of George Eliot and Thomas Hardy.