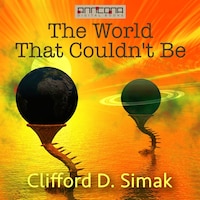 The World That Couldn't Be

The World That Couldn't Be is a science fiction short story by American author Clifford D. Simak.

Layard was a curiosity to sociologists. The planet supported thriving tribes of natives but they were genderless. How could tribes form without families?

But Gavin Duncan didn’t care. He had come to Layard to farm vua plants. Their berries cured mental illnesses and were one of the most expensive commodities in the galaxy.

He was going to make his fortune if he could just keep the Cytha at bay, a big, dumb animal that could munch through 10 rows of vua in a night.

Despite native superstitions he was going to have to hunt and kill the pest if he was to protect his crop. It was a dim-witted beast. How hard could it be? –

The World That Couldn’t Be was first published in the January 1958 issue of Galaxy Science Fiction magazine.

Clifford Donald Simak (1904 -1988) was an American science fiction writer. He was honored by fans with three Hugo Awards and by colleagues with one Nebula Award. The Science Fiction Writers of America made him its third SFWA Grand Master and the Horror Writers Association made him one of three inaugural winners of the Bram Stoker Award for Lifetime Achievement.