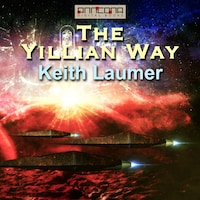 The ceremonious protocol of the Yills was impressive, colorful--and, in the long run, deadly!

Disagreement over protocol results in very interesting negotiations between representatives from Earth and Yill.

Keith Laumer (who spent time as a diplomat himself) is best known for his Retief and Bolo series. He combined humor with a sharp, even acrid view of humans as political creatures.

The Yillian Way was first published in Worlds of If, January 1962.